As the statue was being brought down to ground level a little after 5 p.m. on Wednesday, cheers were heard from a group of people in Marion Square.

It was then placed and secured on a flat bed truck and driven away.

“It was a challenge getting Mr. Calhoun down, you could say it’s been a challenge for 350 years what slavery and racism has meant to this community and this country,” said Mayor John Tecklenburg who was at Marion Square to watch the removal of the statue. “It may be fitting that it was a little challenging to get Mr. Calhoun off the perch.”

Tecklenburg said the statue will be stored in a safe and proper place until a more permanent facility can be found.

The mayor said he would like the statue to be moved to a local museum or a higher education learning facility where it can be placed in full historical context, and be preserved and protected.

The Charleston Museum sent a letter to the mayor stating at this time they don’t want to accept the statue but would considering taking it in the future.

Council member William Dudley Gregorie said that the city’s new commission of Equity, Inclusion and Racial Conciliation could have conversations about what can be put in the statue’s place.

Calhoun was the seventh vice president of the United States. His support of slavery has prompted calls for the statue’s removal from Marion Square for years. But the push to take down the monument gained new momentum in the wake of the death of George Floyd, who died while in police custody in Minneapolis on May 25.

The effort to remove the statue was a challenge as workers hit delays including one early Wednesday morning.

City spokesman Jack O’Toole said that delay involved a breakdown of equipment being used while workers were attempting to cut the statue from its pedestal.

Crews brought in diamond saw cutting blades when they encountered a bronze mounting bracket filled with concrete and some type of epoxy-like material that runs the length of the circular platform the statue stands on.

Crews had been making progress, O’Toole said, until they ran into a problem with the hydraulics in one of the lifts crews were using to reach the top of the pedestal.

While the problem was being repaired, crews began removing plaques about Calhoun that are mounted to the monument itself. Once the hydraulics issue was fixed, crews returned to their work at the base of the statue.

Work began on the removal shortly before 1 a.m. Wednesday, hours after Charleston City Council voted in favor of relocating it.

But shortly before 6 a.m. while the statue still stood on its pedestal over the square, word came from crews at the scene that it would be another hour to an hour-and-a-half because additional supplies were needed. Crews did not specify what additional materials were needed.

The Charleston Police Department announced at 11:34 p.m. on Tuesday that Calhoun Street between Meeting Street and King Street was closed for the removal of the statue.

A crowd gathered overnight at Marion Square as crews worked to remove the statue.

“We have a sense of unity moving forward for racial conciliation and for unity in this city,” Tecklenburg said following the vote. “God bless you all.”

It took nearly two hours to reach the decision during the council meeting as public comments were heard, and council members spoke about the issue.

Councilmember Kevin Shealy said he supported the statue relocation for a number of reasons including to bring the community together and for the families and leaders that have emerged from the Mother Emanuel tragedy.

Councilmember Keith Waring said city council was moving forward with the relocation of the statue for a better community.

“This is a holy city,” Waring said. “God comes first. And that’s what makes this place so special. We can be an example of a nation and indeed the world.”

Tuesday’s decision came after the city did legal research to first figure out whether or not they owned the statue and could take it down.

Some people feel like the statue is a part of history, and said it should remain up.

City officials said they would be consulting with historians and a committee to find a new place for the statue.

According to Tecklenburg, the Heritage Act, a state law which forbids the removal of war related markers in South Carolina, does not pertain to the Calhoun statue.

“Well folks, this is not a war memorial,” Tecklenburg said. “By [removing the statue] I believe we bring peace.”

Tecklenburg said he was confident that city council had the full authority to order the relocation since the statue belongs to the city and is located on grounds owned by a private party. 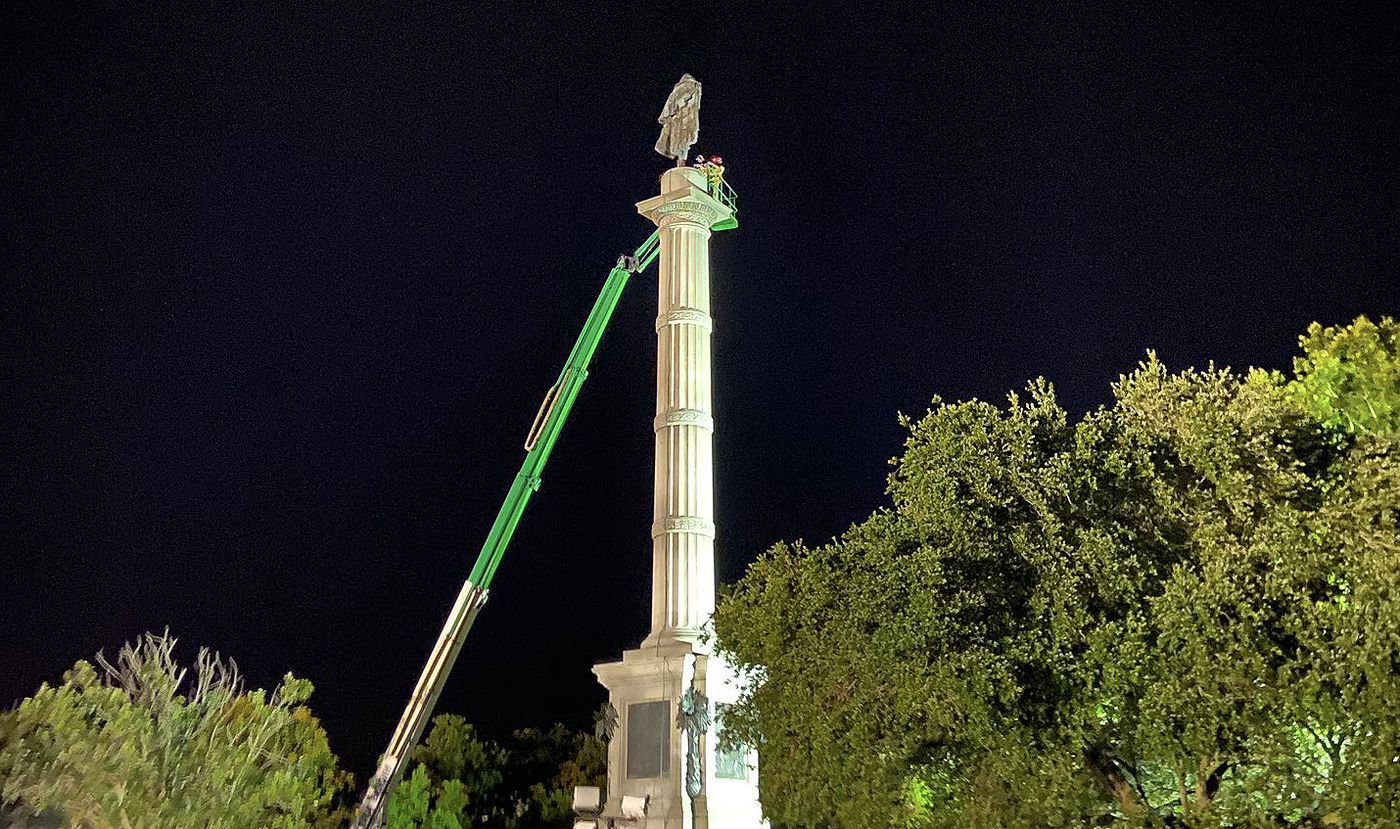 Crews in the process of removing the Calhoun statue in Marion Square in downtown Charleston. (Source: Live 5 News) 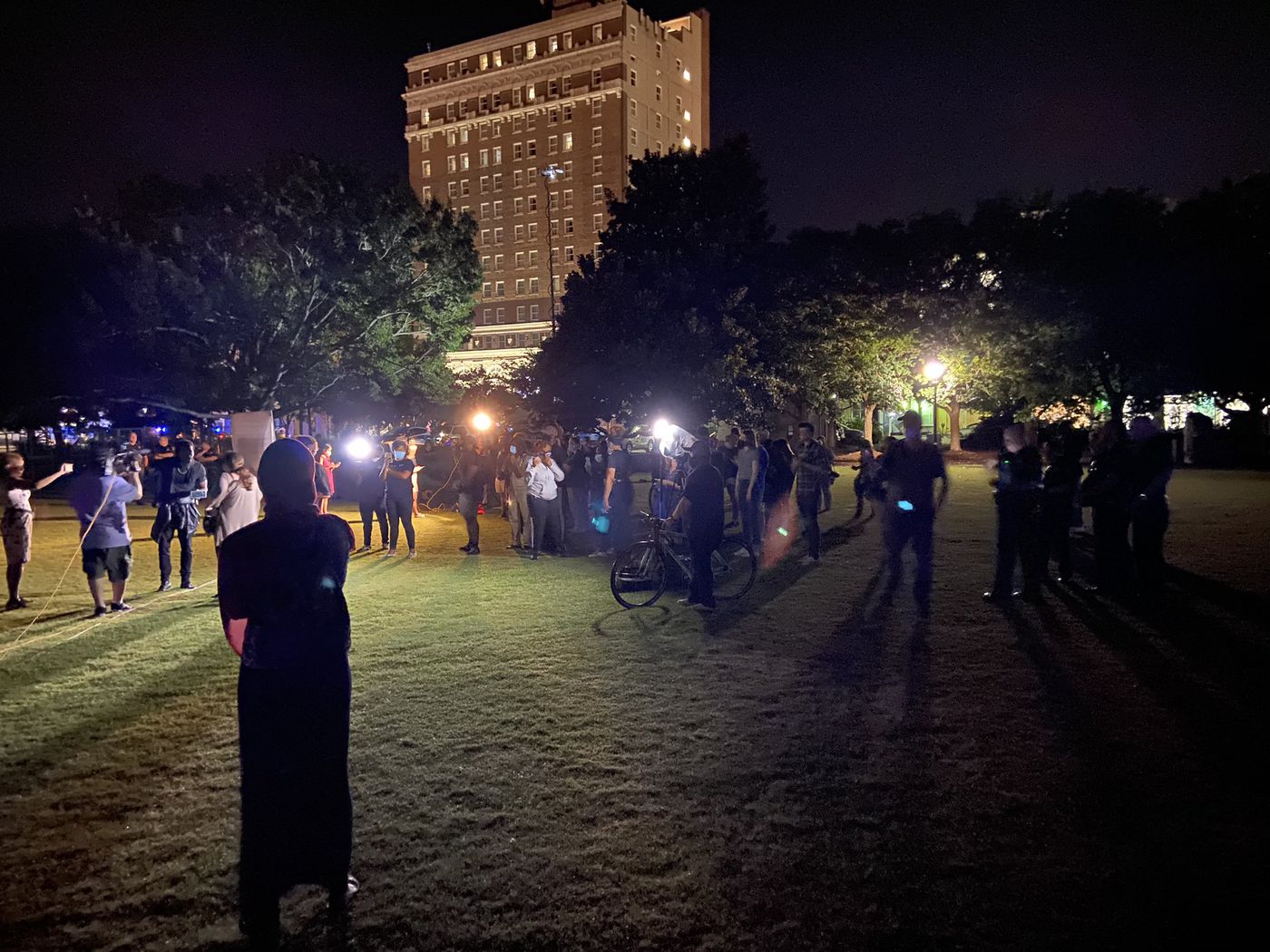 The Charleston Police Department announced at 11:34 p.m. that Calhoun Street between Meeting Street and King Street is closed for the removal of the statue. Police said it will be closed for several hours. (Source: Live 5 News)