The State Infrastructure Bank Board voted Tuesday to kill the extension project to complete I-526.

The board voted 4-3 to kill the project, which would have extended the interstate from West Ashley, where it currently ends, to James and Johns Islands.

Supporters said finishing the interstate would have alleviated traffic problems, while opponents argued it would spur more development on the islands.

Board members said they were convinced Charleston County didn’t have the funding secured to cover cost overruns for the project. County officials said they have abided by the agreement to finish I-526 and that the bank board hasn’t been working with them.

During the hearing, there was a heated confrontation between county council chairman Vic Rawl and bank board chairman John White.

Rawl said he would talk to county council members about the next step and would not rule out a possible lawsuit.

The SIB board's agenda showed the "Mark Clark Project Status" as the last item on the agenda with the words "Action needed" in parenthesis. 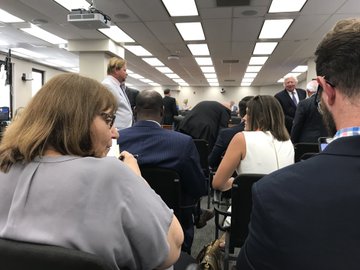 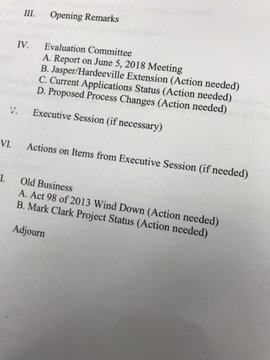 .Gov. Henry McMaster called on the board to approve a plan to complete the interstate on May 25 when the project was considered by many to be dead.

McMaster's spokesman, Brian Symmes, said the governor told the SIB Board he was willing to do whatever it takes to complete I-526.

Earlier in May, McMaster sent a letter to board chairman John White asking the board not to take any action that would kill the I-526 completion project. The board then voted to delay any decisions on the project.

At that meeting, White said the board would work with Charleston County to come to "a mutual understanding."

The crux of the misunderstanding, it seems, is exactly how the completion would be financed. Completing the project is expected to cost approximately $725 million, and the original plan called for the SIB to commit to providing $420 million of that total, with Charleston County and the City of Charleston to foot the remainder of the bill.

But the state bank pulled out of the deal after Charleston County was said to have missed a crucial funding deadline for their part of the cost.

Charleston Mayor John Tecklenburg and several county representatives said they remained optimistic that a deal could be worked out to complete the extension once and for all.

“The refreshing thing that they indicated to us is that they would enter a negotiation, hopefully, to amend the contract and move forward, which is the position that we’ve been in for quite some time,” Charleston County Council Chairman Vic Rawl said in May. Rawl said the county has already come up with a way to pay that money but the board hasn’t moved forward because they haven’t been happy with the county's plans.

Charleston County was asked to come up with $300 million to cover any cost overruns or legal fees.

County officials say they can come up with money.

This is a developing story. Check back for updates.